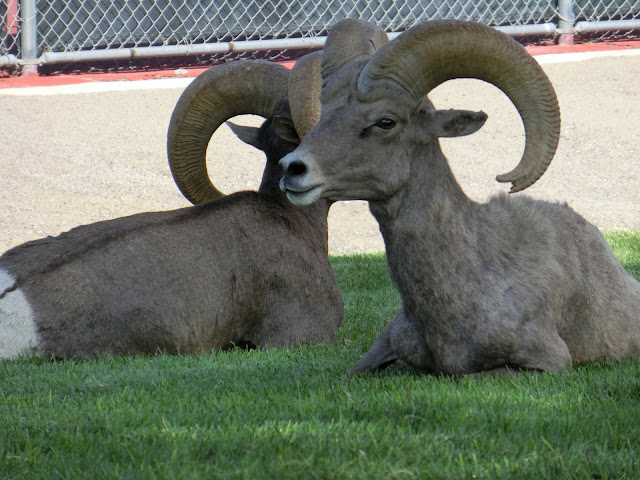 Just hanging with some of the locals, you know? Chilling.

These were taken in Hemenway park, in Boulder City.
The park has long been known for it’s popularity for grazing among the local Big Horn sheep population. When we initially drove past we didn’t see any of the rams, but after stopping for breakfast at the Coffee Cup diner we were willing to give it another shot. Good thing we did! 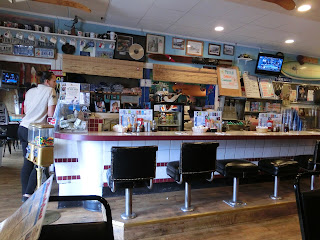 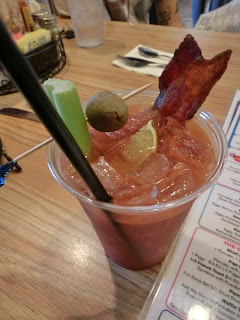 First thing first, a girl has got to eat! 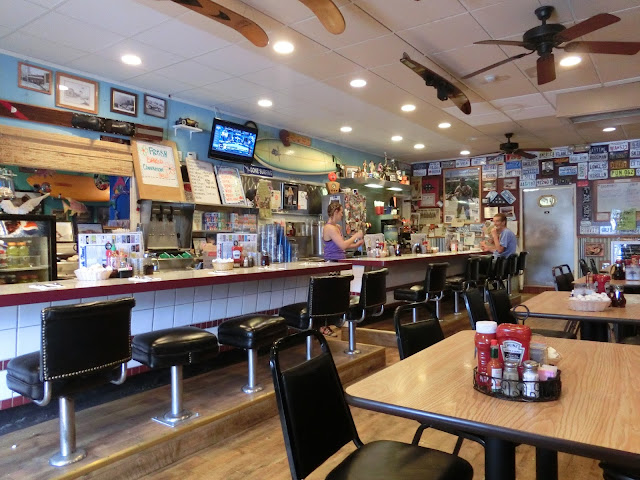 If you should ever find yourself passing through Boulder City, the Coffee Cup is a bit of a landmark. It’s been featured on the Food Network show Diners, Dives & Drive-ins featuring Guy Fieri…
While I’m not sure how much I really trust that guy’s reviews, I have spent enough time in Boulder City to vouch for this place. 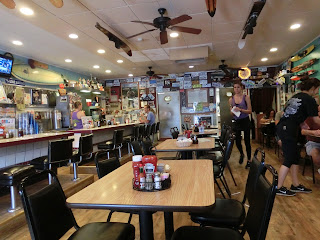 I’ve always enjoyed the collection of license plates adorning the walls, and the sports equipment is a kitschy but fun touch.
There is some serious bible thumping going on here, though, with biblical quotes emblazoned in huge letters across a hallway near the bathroom. o_O  huh.
The important thing, though, is the food!
If the food sucked, no amount of cutesy kitch or righteous Godliness could possibly save it for me. 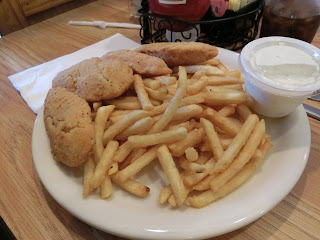 Luckily, the food is good enough.
I don’t know if it’s really “the BOMB” as Guy Fieri put it (I’m telling you, that guy reminds me way too much of the singer of Smash Mouth and late 90’s college party boys for me to trust the legitimacy of his culinary critiques) but when you’re hungry after a long drive or a night sleeping among the coyotes, it will most certainly fill that void and do it sufficiently well.
Antho got the chicken fingers, a standard dish for him, and he enjoyed them. 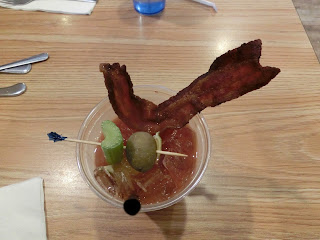 Their bloody mary is pretty damn good, too. Look at that bacon!
Made just for me with a big ol’ J. D’aw. 😉
The olive and celery were on the dry side, but the drink rehydrates them so it’s not a buzzkill. 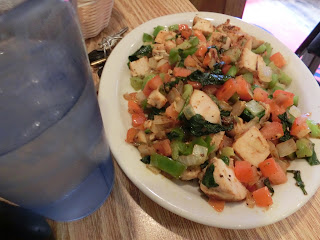 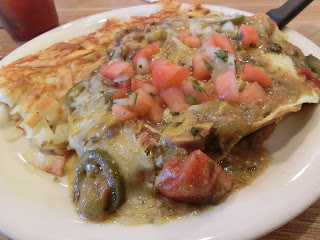 I got the huevos rancheros, smothered in their famous green chile sauce. I’m prone to enjoy green chile anything, though I wasn’t particularly fond of the hash browns as an accouterment. Personally I think I would’ve been happier with rice and beans…so it goes. 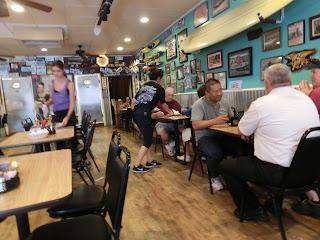 After refueling and doing a bit of thrift shopping where we found some pretty groovy stuff (a new tie-dye shirt for Antho! Cecil B. Demented on VHS! A sailor blouse for me!), we decided to try our luck with the sheep again. Initially it looked like we had struck out, but we waited anyway, enjoying the slight breeze…
after a few minutes, the sheep began to migrate from a nearby neighbor’s yard and make their way into the grassy lawns of Hemenway park! Hurrah! 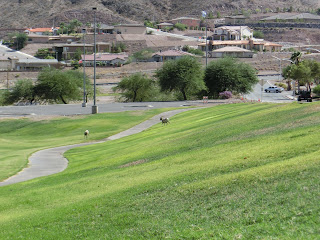 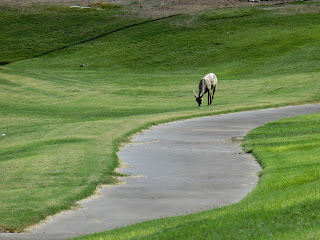 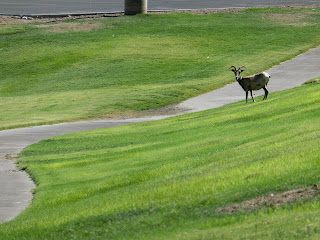 One by one they made their way over… 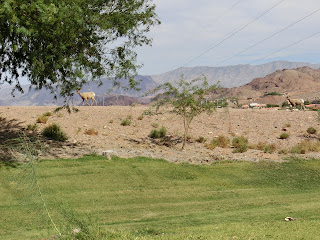 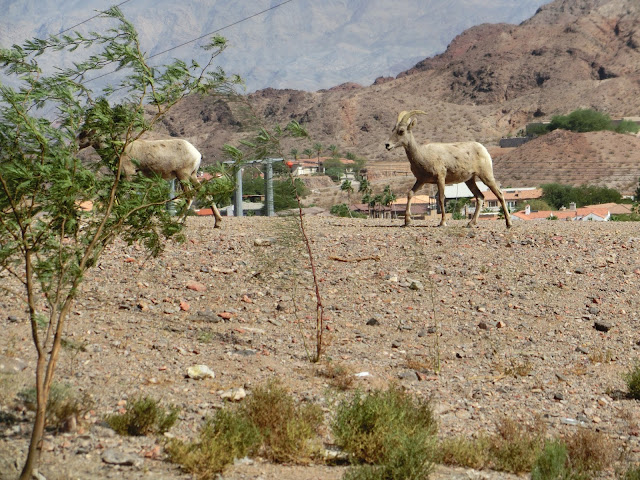 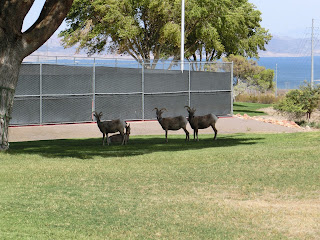 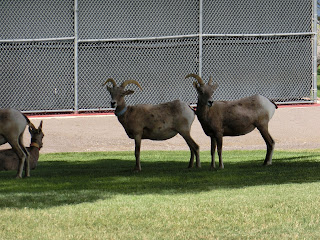 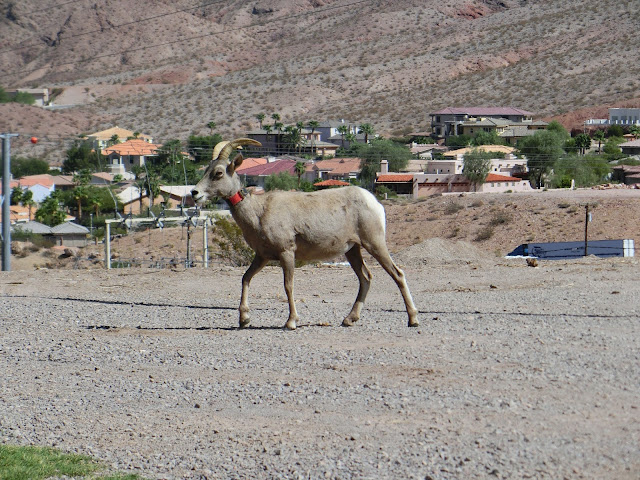 There are signs in the park explaining the purpose of the collars, which are used to monitor the migration patterns and habits of the sheep. Researchers have been using the sheep population from the nearby mountains here to repopulate other areas where the populations have become endangered. Doing so has allowed the sheep to thrive and brought them back from a perilously low population! 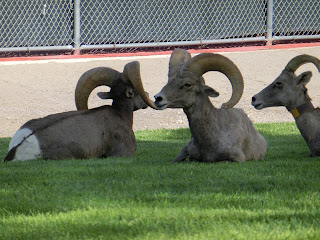 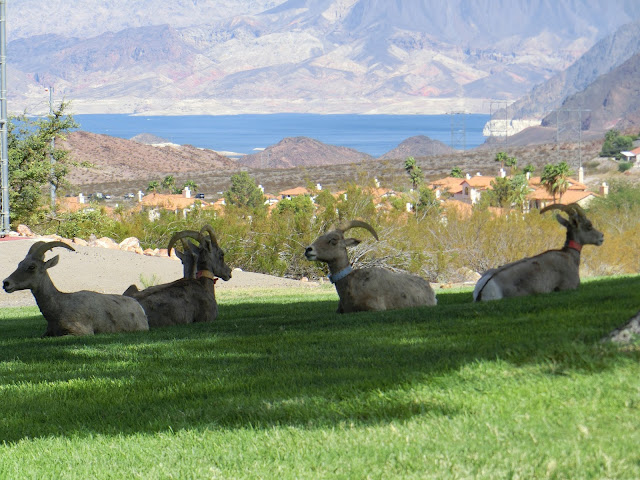 Living it up in the lap of luxury. Just look at that view! 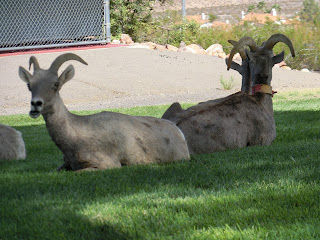 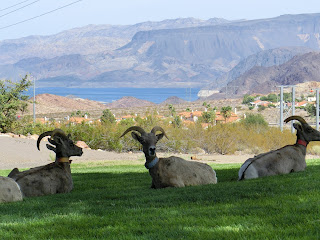 Louie actually managed to crawl pretty close to the sheep in order to snap these photos. With two males in attendance we had to be extremely cautious- those horns aren’t just for show! If incited to attack, those big horns can do some serious damage. Luckily he managed to stay far enough away to keep the peace while getting these great photos! Louie’s a boss.
After getting our fill of staring at sheep, we headed back into the city. 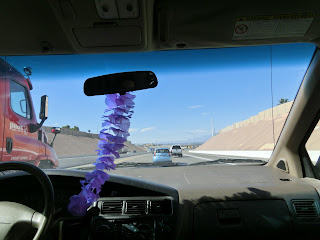 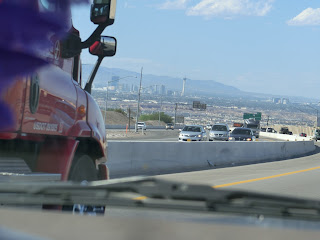 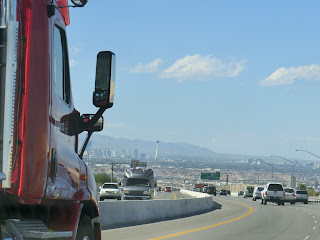 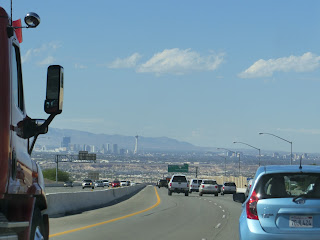 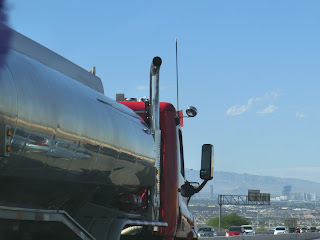 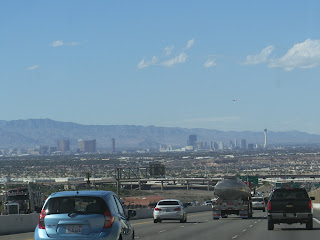 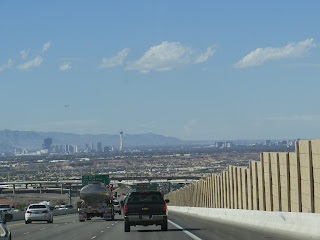