You guys might have seen me talk in other posts about my volunteer work with Critical Care Comics, but in case you haven’t here’s a brief rundown: a bunch of big kids get together with local nerds & do-gooders to gather comics books, then summon up some superheroes and hand out those comics to kids in local hospitals to bring some much needed fun to their day.  Who wouldn’t be happy to have Spiderman, Supergirl and Deadpool bring you a fat stack of comics?! Normally Batman would join us, but this time around he had some business to take care of back in Gotham…something about a fight with the man of steel…pfft…boys.
While I’ve been doing visits with them for a few months now, they’ve been around for 4 years doing good deeds and assembling their super squad! They’re all pretty awesome people in their own right and though Deadpool is a recent addition he’s a smash hit! It’s so much fun seeing how the kids light up when their favourite heroes (or anti-heroes) walk in! I tag along and do caricatures for any of the kids who’d like to be drawn as their favourite heroes or cartoon characters. On this last visit to Saint Rose I got to draw a little Beast Boy, a Wonder Woman and an Elsa along with a super cute little Mickey Mouse! Sometimes the kids will be too nervous or shy to interact much but will light right up when they see my drawing, which is really heart warming to see. Any reason to be in the hospital generally isn’t going to be good, so to bring a smile and some joy into their day is pretty cool! I’ve been doing caricatures for nearly 8 years now and it’s great to be able to give back and do something for people who might not feel up for going out at the moment.
During this visit we had a camera crew of Channel 3 news tag along for a segment that aired later that day. Our super crew went about business as usual, just with a bit more fanfare than normal. ^_^; It was pretty cool seeing our group get some tv-time. We’re legit! It’s true! We really do what we do!
And it’s pretty awesome. I aim to keep tagging along and doing what I can to help cheer people up when and where I can as long as they’ll give me the honour of doing so with their awesome team.

Thanks to @SandraNews3LV for coming today to spotlight everything that @CCComics4kids does in our community! pic.twitter.com/4rfoc0D1zb 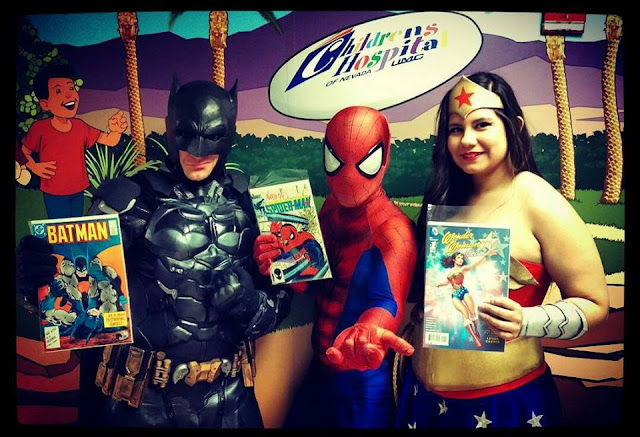 On a cold and gloomy December day, an unlikely team of heroes quietly gathered in front of UMC Children’s Hospital in the Las Vegas valley to battle the forces of sadness and evil!
Taking on a couple of side-kicks in the form of FatBeard & your’s truly, our mission was to bring some fun to the hospital-bound kiddos’ day.
I’ve discussed my work with Critical Care Comics before, but this was the first time I was invited to tag along on a hospital visit. It was a great honour and privilege to take part in their work and seeing the excitement the heroes and comic books inspired was wonderful! Wonder Woman was a surprise hit, with multiple fans proclaiming her as their favourite, much to Batsy & Spidey’s chagrin. 😉 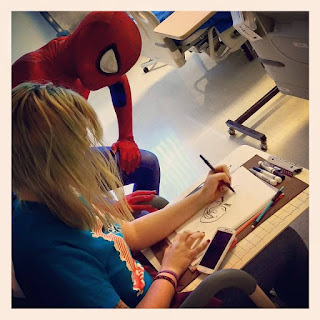 Spider-Man keeping a watchful eye as I work on this drawing of a young Star Wars fan. 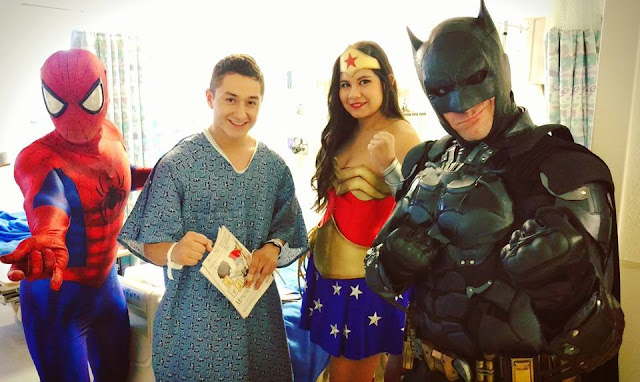 We made sure he got lots of Star Wars comics! He was even watching Return of the Jedi when we popped in. ^_^ Everyone bonded over our excitement for the new movie while I drew. Not only did he get a nice big stack of comics donated by many lovely individuals, the lucky guy got to go home later that same day! Right on! Now he can catch all 3 showings of Star Wars that he had tickets for! 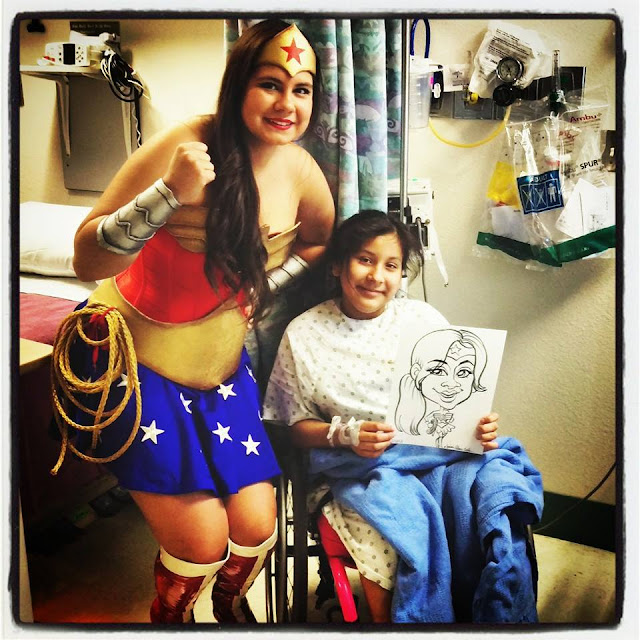 This sweetie was so shy! Her mom told us she had eagerly awaited the heroes visit and she was especially thrilled to have Wonder Woman visit her personally! 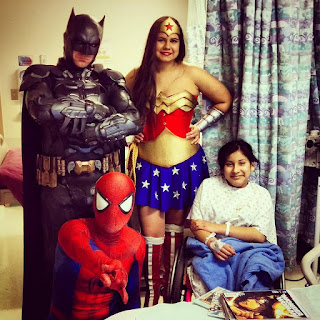 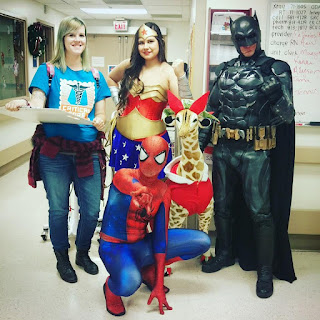 The heroes were familiar with this giraffe, named Dina, and always stop for a photo. Glad I got to join the tradition! Ancho always jokes that I’m his giraffe. ^_^ 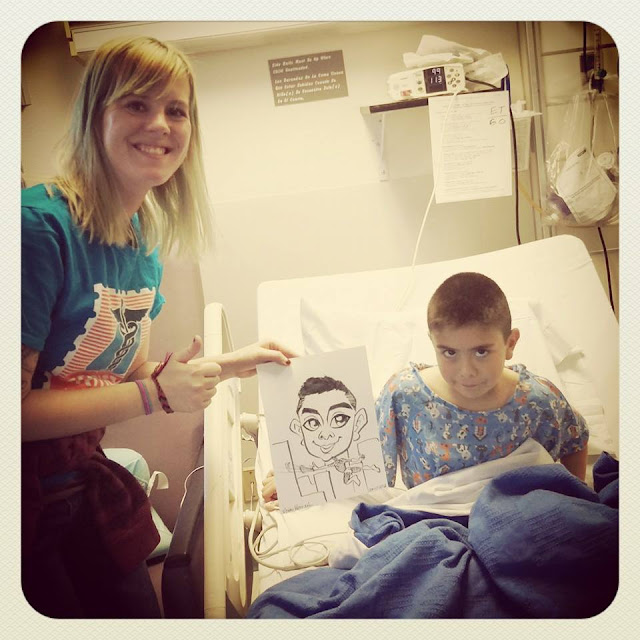 This little fella was a bit intimidated with everyone in his room, but opened up when it was just us and his mum. He loved Spidey and it was my privilege to give him the web-slinger’s powers in caricature! 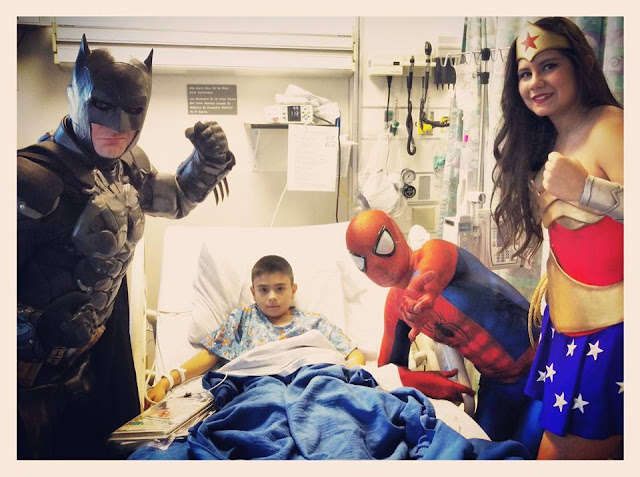 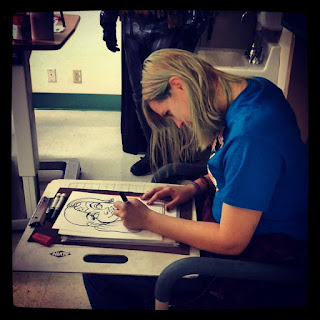 Drawing away while Batman supervises. 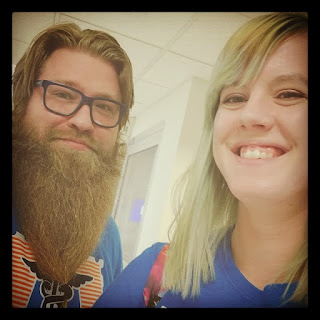 FatBeard was in charge of handing out the comic books, ensuring the fun didn’t end when the heroes left the building! 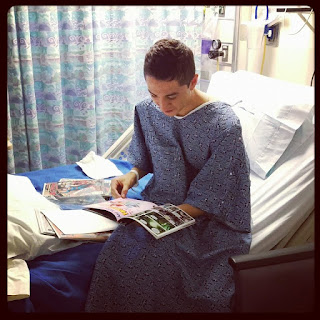 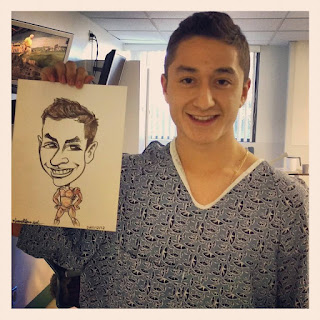 Happy fella! It was his first time ever getting his caricature done. ^_^ 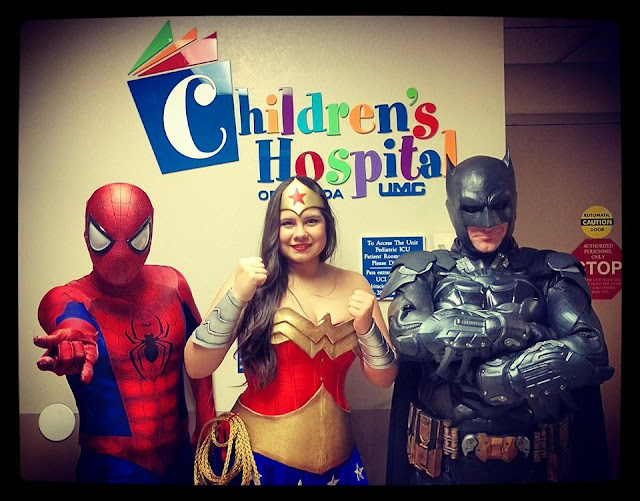 Another successful mission completed!
I’ll be joining the crew on future visits as my performance was well received. Not many people can say they’ve gotten a seal of approval from Spider-Man, Wonder Woman and Batman! My inner child is quite happy to know that I’m lucky enough to team up with some of my favourite heroes growing up. Everything Critical Care Comics does is meant to bring smiles to the faces of kids who need them the most, which is the epitome of heroism in my eyes. Thank you so much for letting me participate, guys. It’s my honour.
XOXO Nau
Categories: Batman, charity, Children's Hospital, comics, Critical Care Comics, hospital visits, Las Vegas, Spider-man, UMC, Vegas Batman, volunteer, volunteering, Wonder Woman
Recent Posts
Recent Comments